Posted on November 2, 2010 by Shannon McClennan 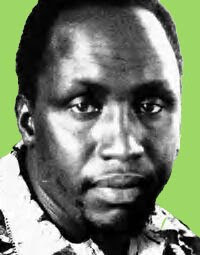 Ngugi Wa Thiong’o is a Kenyan novelist and post-colonial literature theorist. His written works include novels, plays, short stories, essays, literary criticism and children’s literature. He is also the founder and editor of Mutiiri, a Gikuyu-language literary journal. Born in Kenya in 1938 while the country was still a British colony, Thiong’o survived the Mau Mau War of Independence, only to lose his stepbrother in the violence. This, paired with the tragic torture his mother endured during the unrest, greatly influenced his early works.

His first major play, The Black Hermit, was produced in 1962 at the National Theatre in Kampala, Uganda, as part of Uganda’s Independence celebration. In 1963, Thiong’o received a Bachelor of Arts in English Literature from Makerere University College in Kampala, Uganda, and the University of Leeds, UK. His first novel, Weep Not, Child, was published in 1964 and is noted as the first English-language novel to be published by an East African writer.

Following the publication of his third English-language novel, A Grain of Wheat 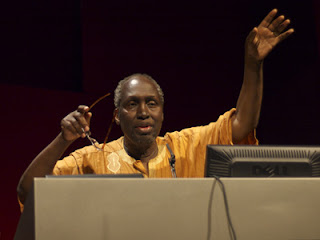 (1967), Thiong’o gave up writing in English, turning instead to his native Gikuyu and Swahili. His play, Ngaahika Ndeenda (I Will Marry When I Want, 1977), was critical of the inequalities and injustices of Kenyan society and as a result, Thiong’o was arrested and imprisoned without charge at Kamiti Maximum Security Prison in December 1977. Even during his imprisonment, Thiong’o continued to write, producing the first ever Gikuyu-language modern novel, Caitaani mutharaba-Ini (Devil on the Cross, 1981), written on toilet paper and translated into English in 1982. Also in 1982, Thiong’o published Detained: A Writer’s Prison Diary, and later Decolonising the Mind: The Politics of Language in African Literature (1986), an essay which proclaimed that African writers should be free to write in their own native languages, rather than be restricted to using only European languages. After Amnesty International named him a Prisoner of Conscience in 1977, an international campaign secured his release in December 1978. However, upon his release from prison, Thiong’o was barred from teaching positions at colleges and universities in Kenya until he was exiled, first to Great Britain and later, to the United States.
Thiong’o has held distinguished positions in universities throughout the United States, including professor of Comparative Literature and Performance Studies at New York University and professor of Comparative Literature at Yale University. After 22 years in exile, Thiong’o and his family returned to Kenya in 2004 where they were attacked by armed gunmen. Escaping once again to the United States, Thiong’o continues to write. To date, his books have been translated into more than 30 languages and continue to garner critical acclaim around the world, including his most recent Wizard of the Crow (2006), an English translation of his Gikuyu-language novel Murogi wa Kagogo and Something Torn and New: An African Renaissance (2009). Ngugi Wa Thiong’o is currently a Distinguished Professor of English and Comparative Literature as well as the Director of the International Center for Writing and Translation at the University of California, Irvine. The author continues to speak at universities around the world and has been accorded many honours, including the 2001 Nonino International Prize for Literature and seven honorary doctorates. More information on Ngugi Wa Thiong’o’s life and writings can be found at his website, ngugiwathiongo.org. A 2004 video from the University of California that features Thiong’o lecturing from his Moving the Centre: The Struggle for Cultural Freedom can be found on YouTube.

—Teresa Li
This entry was posted in Canada. Bookmark the permalink.